I call this a mini review because this series has been so reviewed of late that there is probably not much I can add to the discussion at this point.

If you love the series you love it, if you're luke-warm on it there probably wont be anything that will increase your opinion.

So I've nothing left but to give my opinion on not only the third book, but the series. 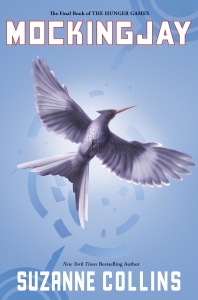 Of course this book is on the waiting list still at the local library but I was anxious to finish the series so I opted for the audio book, which had no wait at all.

For me this was a big mistake. The narrator, Carolyn McCormick, didn't seem to have the same opinion of Katniss, et al. She leaned more to the 'young' in Young Adult than I had in my mind. So I was about 2/3 done when my name came up on the waiting list and I was super glad to swap them out and get Katniss back in my head where she took on more of her BA self I'd attributed to her.

Which brings me to my second opinion of this particular book in the series. While the premise of the Hunger Games was hard enough for the mother of daughters to take, the ending (minor spoiler alert!)

weather due to politics, mistake or deliberate act of war was doubly hard to take. That jolt aside, I think I felt the rest was a bit, actually, anti-climatic. Which definitely surprised me.

As for the series? I'm thinking one tightly written book may have actually done it, but on the cynical side would never have generated as much revenue (by, oh say, 1/3?).

All my moaning and complaining aside, do you know what? I actually really liked this series!! I know! By all rights I should say, oh no I didn't care for that. But it was fun! It was haunted house type of fun, you know it's not great and you know where all the tricks are, but you go anyway and scream and laugh and have a good time.

And you know what else? Sometimes there's absolutely nothing wrong with that! ;)

Laura
Posted by Laura @ The Shabby Rabbit at 2:32 PM