In the midst of the extremely busy month I took a few hours today and took my girls to the mall. Big mistake since I WAS trying to save some money...I just can't help myself when it comes to getting things for them.

I also got a very very brief stroll through the Barnes & Nobel store and realized how much I would love to completely immerse myself in the book world. I wanted to read everything I saw! All of them on the best-seller shelf,  from the new releases display, from the 3 for 19.00 or what ever it was, from the inspirational endcap. And I got a bit sad that I can only read so fast. And that I didn't have time to properly narrow down my choices and guiltily left without anything. Except its partially ok because I have a trip planned to an indie soon.

Which also got me thinking about how far I have to go for books. Which again made me sad.

So when I got home i decided to wallow for a bit longer and watch my netflix movie. It's not a new release, actually it's almost a year old, but I hadn't seen it yet. The movie was Super 8. 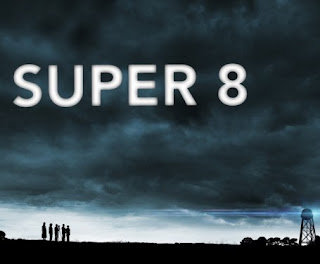 And I loved it!!! It was so much 'Friday Night Creature Feature' FUN!!!!  If you haven't seen here's the imdb synopsis:
In the summer of 1979, a group of friends in a small Ohio town witness a catastrophic train crash while making a super 8 movie and soon suspect that it was not an accident. Shortly after, unusual disappearances and inexplicable events begin to take place in town, and the local Deputy tries to uncover the truth - something more terrifying than any of them could have imagined.

It was eerie and mysterious and creepy and jump-out-and-go-boo scary, the kids were amazing and the grown-ups were perfectly adultly oblivious but stepped up to the plate like adults should.

The time frame of the suburban 70's was so perfect for me because that's when I was watching movies like this. Or sort of like this, if Godzilla vs Mothra is sort of like this. And I was totally happy!! But it was done by Spielberg and well, that means it had to have some greatness to it!

As I was watching my mind kept sneaking off to a little world called The Billionaires Bookshop. Its a little place where I pretend I have so much money that  Profit and Loss statements hardly matter and I can focus on just making a place in my little town where bookish folk can come together.  I keep coming up with fun ideas...like a monster movie night. And then a brainstorming session on what would be a great read to continue the theme... I'd start it off with...
Under the Dome.. and let the ideas go from there. (which by the way, have Spielberg and King ever teamed up? Pardon me while I run over to google for a moment .... according to the illustrious information on the interwebs.. survey says.... Not Yet...but guess what... they are working together on ....(dramatic music: buhm buhm buhm) Under the Dome.)

Which was just a little trippy! Anyway....

And so on....wouldn't it be great to have a place like that here in town? Wouldn't it?  35 miles or so to the closest bookstore and none of them have a full fledged book culture. And I wouldn't get to enjoy much of it anyway because, well I'm 35 FRICKEN miles away.

I wonder if I should maybe take a job down at B&N to see what this book biz is all about. hmmmm? Maybe prepare myself with a little on-the-job training? Because if the Billionaires Bookshop ever actually came into being it would be suuuuuch a cool place I just KNOW it! :)