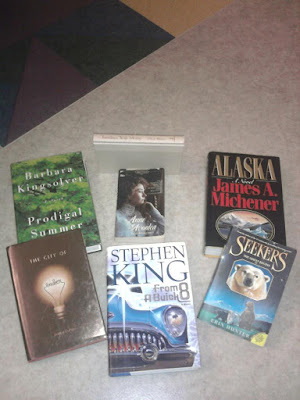 The thing about being on a quest is, you never know when the next adventure will strike! So you must always be prepared. Luckily I was today!
I was minding my own business and thinking about my daughter and how the chemo is going this time. I was simply and innocently taking movies back up to the Patients Library on the 8th floor while she slept. When I stepped off the elevator I suddenly found myself surrounded by tables and people and checkout lines, and the greatest thing ever was that the tables were all full of books...(ok and few old vhs and some xbox games, but I skipped those tables)...it was like a flash mob for bookish-folk!
I wandered to the tables that seemed to hold adult lit hard back books and sure enough, My eyes lit first on 2 Stephen King books, the first thing I saw was a beautiful copy of Everythings Eventual. However I have that already but laying right smack dab next to it was this copy of From a Buick 8. And it's a first! Yay! Score! Especially with the sign proclaiming Hard Backs $2.00. My kind of quest prices! As I said, I was prepared with 4 dollars in my pocket and 1 I HAD to spend on a cup of coffee.
So that leaves the mystery of the other books...well not exactly. So later on I thought about a little girl on the unit here who we've all fallen in love with. And she was going home today and I thought, what better parting gift than a book for her. So I made a decision to go back up and get her one.
So I got up there and I found the perfect book. It's one of those -make a finger puppet out of the book characters book, I don't have a photo of this one. And it was of a pig...since my job is for a pig feed manufacturing company, I thought it was appropriate coming from me. Plus it's just fricken cute.
So I begin seeing what  .50 cent paperbacks might interest me when a nice lady came by and handed me a plastic grocery bag and said, bag up what you want, $2.00 a bag.
Oh. Happy. Day.
So along home came a few more books with me.
I'm so anxious to get to the Barbara Kingsolver Prodigal Summer!
And I picked up  the James Michner book because I have a friend who absolutely loves him and I've yet to read him.
Anne of Avonlea - well I had to have this since I just finished Anne of Green Gables earlier this summer.
City of Ember - I just love this book! I remember when my kids brought it home from school as tweens and I picked it up just to see what it was and finished it later that night, not setting it down once I don't think in between.
The book up on its side above Anne is Tuesdays With Morrie. A book I've heard a lot about and everyone I hear about it from seems to simply love it.
And then there's Seekers. I've seen the Warriors series in the YA section often and thought the books looked intriguing, now I have #1 and 1 of these days I'll get to start it!
So the moral of the story is, be on the lookout for clue and ques on your book quest because you never know where they will appear!
Posted by Laura @ The Shabby Rabbit at 10:46 PM