Revisit - You Deserve Nothing - Alexander Maksik

It's day two of Book Blogger Appreciation Week! Today's scheduled topic is blogger interviews however I was simply couldn't  guarantee the time to give to this one so I'm more of a spectator today, which is fine by me and I am really looking forward to all the insider info we get to find out about our fellow bookish-folk!

In the mean time, I'd like to do a post revisit in celebration of the September 15th release of Alexander Maksik's book You Deserve Nothing. And watch out! This is going to be a name you hear more than once! :) 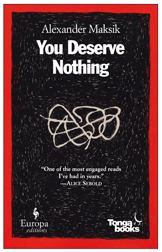 Synopsis From Goodreads:
Set in an international high school in Paris, YOU DESERVE NOTHING is told in three voices: that of Will, a charismatic young teacher who brings ideas alive in the classroom in a way that profoundly affects his students; Gilad, one of Will's students who has grown up behind compound walls in places like Dakar and Dubai, and for whom Paris and Will's senior seminar are the first heady tastes of freedom; and Marie, the beautiful, vulnerable senior with whom, unbeknowst to Gilad, Will is having an illicit affair. Utterly compelling, brilliantly written, YOU DESERVE NOTHING is a captivating tale about teachers and students, of moral uncertainties and the coming of adulthood. It heralds the arrival of a brilliant new voice in fiction.
My Review:
I didn’t have any preconceived  notions about this book going into it. I’d read the synopsis and heard what my daughter had had to say about it. And we differed on our ultimate impression of the book - mostly over the importance of the character Gilad.  I actually liked it more than I thought I would in some ways yet less in others.
The writing was amazing:  tight and beautiful, the flow seamless. It caught my attention on the first page. It appealed to the perceived ‘unique’ in all of us. Brought out those feelings that so many people have but everyone thinks they are the only ones. That relateability becomes like a secret club of relief and Maksik included me in that club in many of his characters!!
I didn’t expect the, how shall I say, descriptive sex scenes. (hence the 4.5 rather than 5 stars) And I think I didn’t because I had a hard time finding a genre where I felt this story fit. Literary is where I’d end up with it. But so much of it could have leaned to the Young Adult. The writing was reminiscent of John Green. The subject matter was more mature and despite being set in a high school, had a much more college air to it. Then again…. It is set in Europe which may be the point.
There were predictable elements to this tryst story (you can’t really call it a love story) but sometimes life is predictable when it comes to these matters isn’t it? How many time have we seen a friend enter into a relationship and known it wasn’t going to go well, or been jealously happy for them because we knew it was a great match. So the fault doesn’t lay with the story, but rather Maksik’s story is a crystaline reflection of life and how it happens. For better or worse.
I hope You Deserve Nothing has great success upon it’s release because it certainly deserves it. The characters are wonderful, I haven’t even touched on the fact that it’s not just Europe but PARIS for pete’s sake! This is going to be one NOT TO MISS! Watch for it. Get it. Read it! You won’t be sorry!
Posted by Laura @ The Shabby Rabbit at 2:13 PM