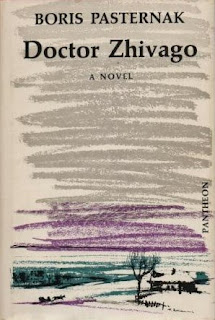 Author: Boris Pasternak : translated by Max Hayward and Manya Harari and (the poems) by Bernard Guilbert Guerney.
Pages: 559
Why I Read This Book - As I add books to my TBR pile I enjoy adding works that are considered classics. Plus I have seen some blogs extolling the virtues of Russian Lit and I hadn't read any. So I chose Doctor Zhivago - A copy of which I picked up at a yard sale for about .50 cents.
RATING: 4.5 /5

This famous novel of the Russian revolution and Civil War became a cause celebre when its publication was cancelled by Soviet authorities and Pasternak had the manuscript smuggled out of the country for publication. Doctor Zhivago was cited by the Swedish Academy when it awarded Pasternak the Nobel Prize for Literature in 1958 (an award that Pasternak refused, under pressure from the Soviet government).
The controversy surrounding the novel's publication and the notoriety of the David Lean's popular film adaptation of the novel have obscured the quality of the work itself. Simply stated, Doctor Zhivago is one of the most powerful books published in the 20th century and will be read long after the memory of its publication history has faded; it not only brings the Russian Revolution and the early Soviet era to life, it tells the stories of some of the most memorable characters to be found in all of literature.
Review:
I was up in the air about this novel until the last 1/4 of the book, then it won me over. While no casual read, it is one that is at times so beautiful, poignant, and tragic.

I know I thought this was some Russian love story, and while it is, it is mostly a Russian story. About life during WWI and the resulting civil war. I have NOT ever seen the movie and the only fore-knowledge I came into this book with was the song from the movie (mostly because, since my name is Laura, I kept getting music boxes that played Lara's Theme ).

Doctor Zhivago's idea of love isn't exactly mine and I'd actually classify him as more of... well... a jerk. But that's what makes this novel great in my mind. It took a harsh look at REAL human emotions and gave realistic insight into all human nature.

It was a difficult read for the most part (I even checked in with - gasp- sparknotes to make sure I wasn't missing some huge theme elements!) and I've wondered how other translations read. And I'm sure there were nuances that I still missed. Overall, I was affected by Doctor Zhivago, while not really liking him.

I certainly feel I've seen inside that era in their history and am glad I read it.

In thinking on it, I can metaphorically see the women as PreWar society, Civil War society, and Post War. Each with a legacy of their own. I'm not sure that was intended, but the passions certainly feel right. One we take for granted, one consumes us, and one we settle into. But none of which the good Dr. Yuri REALLY chose.

Elements towards the end of this book (maybe all the way through, but the end is where it clicked with me) reminded me very strongly of Cold Mountain, which made me very happy...for two reasons... 1) nostalgically I loved Cold Mountain..and 2) If Fraizer emulated in any way the writing of Pasternak and his take on Wars both world and civil, I am honored to have read them both.

I think this book will work on me for quite awhile. I'm sure over the coarse of the next few days there are other things about this book I'll think of.

UP NEXT: The Help - Katheryn Stockett
Posted by Laura @ The Shabby Rabbit at 8:19 PM