Review: Nickel and Dimed ~ On Not Getting By in America 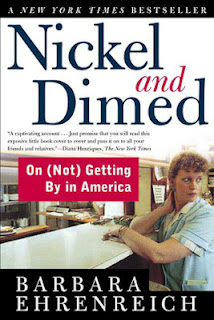 Title:  Nickel and Dimed ~ On Not Getting By in America
Author:  Barbara Ehrenreich

Why I Read This Book: This one has been on my radar practically since it came out in 2001. It caught my attention that finally someone else was seeing the plight of those who have to fight and scrape everyday

Synopsis From Goodreads:
Millions of Americans work for poverty-level wages, and one day Barbara Ehrenreich decided to join them. She was inspired in part by the rhetoric surrounding welfare reform, which promised that any job equals a better life. But how can anyone survive, let alone prosper, on $6 to $7 an hour? To find out, Ehrenreich moved from Florida to Maine to Minnesota, taking the cheapest lodgings available and accepting work as a waitress, hotel maid, house cleaner, nursing-home aide, and Wal-Mart salesperson. She soon discovered that even the "lowliest" occupations require exhausting mental and physical efforts. And one job is not enough; you need at least two if you intend to live indoors.

Nickel and Dimed reveals low-wage America in all its tenacity, anxiety, and surprising generosity -- a land of Big Boxes, fast food, and a thousand desperate strategies for survival. Instantly acclaimed for its insight, humor, and passion, this book is changing the way America perceives its working poor.


My Review:
The working poor. Been there. According to some of the state statistics I'm still there. I still qualify for reduced price lunches for my kids and I can still get state health aid. And mine is considered a GOOD job! And I DO think it's a good job. I have also worked lesser jobs, the type of jobs that Barbara Ehrenreich works in her book. I've worked at a conveinence store. I've worked in a factory. I was an awful waitress so that didn't pan out. And I've worked in offices for minimum wage while still trying to put together a polished business professional wardrobe! And Barabara finds out about how life nit picks the woking poor.

And not only does she find out that not only in Florida, not only in Maine and even not in the gentle, hardworking Midwest, do they gouge you when you're over a barrel for someplace to rent because you cant come up with a deposit yet, she writes about it with ease and finesse. Despite her advanced degree, I never ever ever felt she talked down about the people she worked with, and only talked down about the people she worked for deservedly. This was not a role Barbara faked her way through. She BECAME the woman needing a job to get by.  And it shows in her writing that this wasn't a fake-it, sensationalist undertaking. This was good writing about a 'gorilla in the room' topic.

Now granted, about the only thing that wasn't fully addressed would be that once you get somewhere and begin to get settled you start to get a flow and once that happenes then you start to learn more what can be done with steady income. and what help may be available, government or otherwise. And usually there is some advancement. While historically it wouldn't come from climbing the corporate ladder in any of the businesses Barbara was employed in, those wages (as she points out with the Associate who'd barely gotten .75 cents in raises in years) are pretty stagnant, but in stability and networking. Those things help. But seriously, that was so very very minor compared to what was touched on! She barely scratched the surface on how eating healthy is skewed against the poor. You can't keep a fridge full of fresh produce on 7 bucks an hour.

Barabara opened even my eyes. Where are the people working for affordable housing? Where are funds for deposits and help with budgeting skills! Where are the nutritionists and educators? Scholarships? Co-op daycare? It seems there are tons of opportunites to help that still see gaping holes!
And keep in mind that this book, this experiment in real living, took place in 2001. Do you remember the economy in 2001? Pre-real estate bubble burst? the Bull years? hmmmm

Imagine whats going on out there now. Imagine it the next time your Walmart assoaciate sighs when you bring 15 things to the 10 item check out. Or gives you a dirty look for leaving your impulse white stag shirt purchase lying in housewares because you changed your mind.
Imagine it when your waitress has to force a smile because she's been oh her feet for 7 hours. Or when the hotel staff barely acknowlege you. Or when your home is freshly dusted and floors clean before you get home.

How far are their dollars going today?

What will happen to them tomorrow.

Who's day can you ease with just 1% more tip,
with just a kind word,
leave a grocery store gift card for your housekeeper occasionally.

Yes they are being paid for what they do, but they don't know what tomorrow holds. Barbara has shown us point blank and to the point that there are differences and they are not always warranted.

Nickel and Dimed is an important book for any time. it speaks not only to our economy, but to our humanity.