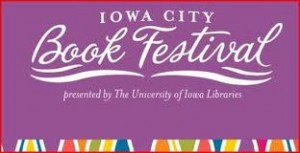 I've been looking forward to this event for months!

My plans for how long I'd get to stay in Iowa City changed
And who I was going with changed (my friend is still recovering from surgery, but my youngest agreed to go with me)
And how much I could spend changed
Even the route I'd drive to get there changed

But I got there.
And I knew the venue was going to be different this year, but it had also changed.

I'm not sure I was sold on it.

But I did get to hear 3 author talks!!! There were so many authors this year, it was really very hard to choose who to go hear!! So many overlapped that I wish I could get videos of the talks I missed as well! 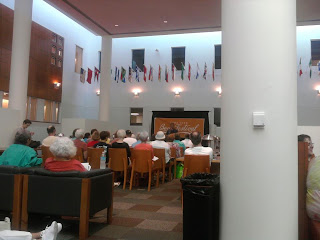 The first talk I choose was Larry Baker and Joe Blair discussing their works and the amount of truth in both fiction and memoir. Larry Baker has a new novel out titled: Love and Other Delusions and Joe Blair has a memoir out now: By The Iowa Sea Both guys are terribly terribly FUNNY!! I've not read either gentleman's works but the exerpts and the way they can talk has me about ready to Spit with anticipation to get to them.... OH and as to which contains more truth, ficiton or memoir, They both MUST contain truth to be good, but there is a vast difference between Truth and Facts.

We didn't get to hang around and shake hands, or listen to interactions with the crowd as we had to scoot to a different campus building to hear the next author I'd chosen....and yet another GREAT choice it turned out to be!! 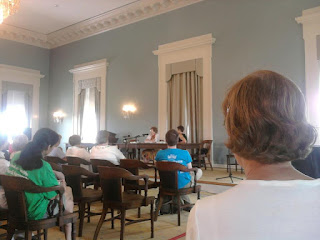 This pathetically far away phone picture is of Evelyn Birkby speaking in the Senate Chamber of the Old Capital on the University of Iowa campus. (in the area known as The Pentacrest).

To say Miss Evelyn is charming is about like saying cheesecake is a sweet. No Miss Evelyn Birkby is the most DARLING thing ever to put pen to paper or address a radio audience!

For those of you not familiar with her. She's been writing a weekly homemakers newspaper column since 1949 and has never missed! She also began broadcasting with the folks on KMA Radio and the program Kitchen-Klatter which was the longest running homemaker program in the history of radio. She paved the way for other women in broadcasting and writing... AND she survived the sixties!

Her tale telling seemed naieve and innoncent but don't underestimate her, she's shrewd and smart and she gets whats going on in the world around her!!

She was a dynamic engaging speaker who was full of not only interesting annecdotes but excellent encouragement and advice...

all the more impressive since this stylish lady just happens to be 93 years old!!

Seriously. It was amazing. If writing and making sense of the world around you though expression is what keeps her this vibrant, I'm going to be writing every day!

Evelyn has a website
www.evelynbirkby.com
and a new book coming out in September: Always Put in a Recipe

Lunch was downtown in a great little pub with better-than-pub food. Bo James is on Washington street just across the way from the main campus. It was the sandwich board with the advertised lunch specials that helped us make a decision amongst the many Iowa City choices.

Then off to hear our last speaker. 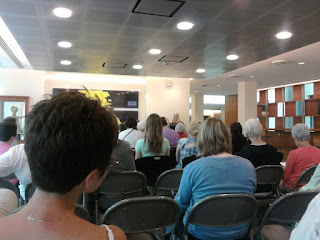 Again a woefully distant image...are you getting the idea that I do like to sit at the back? :)
Now I've met Heather Gudenkauf 2 times before this, but I had never gotten to hear her talk about her work. She began by reading an exerpt that simply makes me wish I could clone myself and be able to literally simultaneously read 3 or 4 books at a time because I am very very excited to get to the story she teased from her new book
One Breath Away

There are things that makes me feel an idol-like kinship with this particular author. We've both had children at University of Iowa Hospitals and clinics (they even had the same docs) and we've both attended Unviersity of Iowa. She even lived in the same dorm my oldest is going to be in this fall! We live in the same area of the state too.

And she gives me hope. She didn't start writing novels until she was married and had children. So comparatively, not that long ago! It means you don't have to be the lauded golden child of the literary world just out of high school to become a sucessful author and be able to see your ideas and the stories that carry them, in print.

One of my favorite things about her talk was that she brought along a decent sized packet of rejection letters for us to see. It made her human and more than one of us rushed up after the talk to see what a New York Times bestselling author gets dinged on in rejection letter. Let me tell you, while no doubt rejections, they were still pretty flattering :)

All in all it was such a fun time..

But...the ineveitable but... the committee may want to do an indepth debriefing about the venues. I didn't feel connected to the festival as a locale event at all, the number of vendors was way way down which I found disappointing, and I didn't feel a kinship with the other event attendees that were wandering the campus and downtown.

This idea, this Festival, needs some intensive TLC to help it coalesce into a dynamic movement.   I would love to see many many more vendors, possibly with an indoor space, some food vendors and some outdoor eating area (invite the libraries from all around to have a fundraising snack booth...it doens't have to be fancy) and at the edge of the eating and beverage area the stage music (poor guys were playing to the sparrows most of the time I dashed by).  And allow us 15 minutes of discussion time amongst ourselves between talks. We love meeting other bookish-folk in our area. It's like seeing another wizard in a crowd of muggels :)

Did I mention I had an AMAZING TIME! Made all the better because it was my birthday :) The best present ever!!

PS ~ the excitement continued today (Sunday) with readings scattered at fun venues throughout the city (mostly near campus area). Authors taking time to read their works in small shops and cafes and getting to know their audience afterwards. A celbration of Iowa City as the City of Literature that it is. Wish I could have been there for that too!
Posted by Laura @ The Shabby Rabbit at 11:40 AM