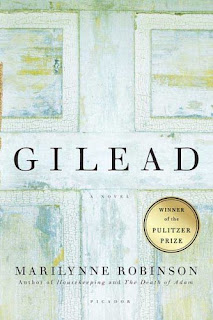 Why I Read This Book: This was for a challenge, the 2011 Classics Challenge, there were catagories of books to pick for and this was my 21st Century Classic pick. I had started to look for a book for this catagory and the first one I came across was Gilead. When I read the blurb and it was also set in my home state of Iowa, I knew it would be a good choice. It turned out it was a perfect choice and I stand by it 100% as a 21st Century Classic.

Synopsis from Goodreads:
My Review:

I mostly listened to the audio book of Gilead in my car while commuting. Except for the last bit which I read (I couldn't wait to finish it until I had to commute again so I checked it out and finished it). That turned out to be a good choice since I cried so much I might have wrecked had I still been in the car!

Good heavens this was a wonderful book!! The writing was gorgeous, the story of the lives of John Ames and his family past and present was so engaging! I cared about each and every character! Deeply.

Since the protagonist John Ames is a pastor there is theology, but I'm a person of faith and I felt there were wonderful insights drawn that made life and bible relate-able and even turned events into retold parables that still carried messages of hope, love, healing, and grace.

I hope that people not of faith don't shy away from it, it is not in the same vein as Christian Fiction. This is HUMAN fiction with a Christian main character, nothing more, certainly nothing less!!

One of these days I'd like to own a copy of this book. I want to mark it up!!! To underline all the wise quotes and touching analogies, to write in the margin the insights it has given me. And revisit the slumbering little town of Gilead and the residents that make it as humanly charming and deeply moving as it was.