Review: Strange As This Weather Has Been - Ann Pancake 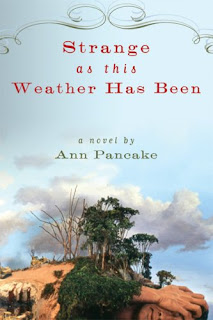 Title: Strange As This Weather Has Been
Author: Ann Pancake
Pages: 357
Publisher: Shoemaker Hoard
Why I Read This Book: I read this book as a tie in to the vacation I took to my paternal roots of Gauley Mountain, Ansted West Virginia. It was my Dad, myself, my step-mom and my teenage, Midwestern daughters. It was an extremely entertaining trip watching these girls totally FREAK OUT on true blue Appalachia!! And when I came home, wondering if I’d ever get back there again in my lifetime, I wanted to read something that paid homage to that. And I found it to a T in Ann Pancakes novel.
RATING: 4.75/5
Synopsis From Goodreads:
Strange As This Weather Has Been follows several members of the family, with a particular focus on fifteen-year-old Bant and her mother, Lace. Working at a “scab” motel, Bant becomes involved with a young miner while her mother contemplates joining the fight against the mining companies. As domestic conflicts escalate at home, the children are pushed more and more outside among junk from the floods and felled trees in the hollows—the only nature they have ever known. But Bant has other memories and is as curious and strong-willed as her mother, and ultimately comes to discover the very real threat of destruction that looms as much in the landscape as it does at home.
My Review
I read this book to try to capture MY own feelings and emotions of memories in the West Virginia Mountains. And I think Ann Pancake and I have traveled some of the same winding mountain roads. From Beckley to the New River Gorge familiarity abounded.
But no where so much as in the characters we follow from a typically dysfunctional family, especially Lace and Bant who seemed every bit a piece of not only myself but so many of the people I’ve known. Mountain-folk or Flatlanders. Strange as this Weather Has Been revolves around Lace and Bant primarily. Mother and daughter looking at life in the mountains from too sadly similar generations. And the choices left for their future; or lack there of. And about just how deep roots run.
Told in the voices of the family members, SATWHB switches chronology and POV but I had no trouble following where who was where when or how they felt, which was crucial.
Pancake’s prose kept me right there in both imagination and memory and I could smell the loamy humid richness of the dark of the wooded mountain. The family was one million percent believable and relatable. They are neighbors and friends we all know. They are headstrong girls making questionable decisions and they are headstrong boys feeling so inferior their only recourse becomes an over abundance of pride. And I loved each and every one. Despite themselves.
My one criticism is wondering if those not familiar with this region; with abandoned mines and hollers filled with trailers on hewn out ‘shelves’ on the mountain side, would really have enough of a frame of reference to ‘get’ this book. But I’m not sure those without that frame of ref. were Pancakes target audience. Regardless, I say READ IT! Push on through the parts you don’t get, it’ll make enough sense and then you wont miss any of the wonderful passages and unforgettable quotes.
Because you see Strange As This Weather Has Been reads like any best seller list dystopian novel.
Except this is REAL. The conditions are REAL. The continued destruction is REAL!!! I could not believe these practices were not punishable by the harshest laws in the universe what mountain top removal strip mining does to IRREPARABLY harm this precious, precious ecosystem. And it is those who still live in nervous silence that I believe Ms Ann Pancake was trying to reach… and I wish I could help her.
I very much loved this book, but in a way you love your teenager when they are being, well, teenagers: sometimes with difficulty. This book is emotionally challenging but more than worth the effort. I doubt it will leave you unchanged.
My Ancestors settled an area called Panther Mountain in West Virginia. I don’t know yet where that is today exactly, but I hope Pancake's book helps save it.
And, God Forbid, it doesn’t. I will trust Ann Pancake's skill as a talented writer to keeping the memory of those who lived the unique life of West Virginia in all her shame and glory.
Posted by Laura @ The Shabby Rabbit at 10:42 PM