I'm thrilled that I get to attend my first real book event in a couple weeks. I am back in Iowa City at the University of Iowa Hospitals and Clinics as my daughter is here for round 3 of her 4 rounds of chemo. And just practically across the street, over on campus, it is time for :
Iowa City Book Festival. Home based at the Main Library at the University of Iowa campus. 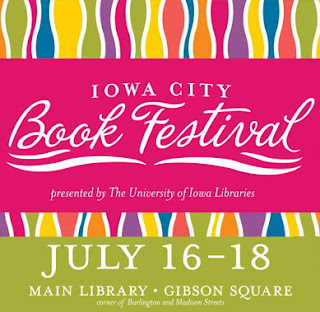 There are tons of neat things planned! 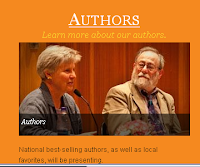 More information is available at the website. But it has the reputation of being a large event that is wonderfully planned and well executed. 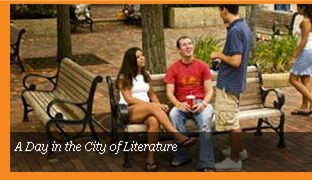 Iowa City has true literary tradition as home of the Writer's Workshop. And getting to rub elbows in THAT community will be like a dream come true. If all goes well, maybe my daughter will be feeling well enough to get out on a pass to at least get to see it.
It has been named one of UNESCO'S Cities of Literature explained on Wikipdia as:

UNESCO's City of Literature program is part of its Creative Cities Network which was launched in 2004.[1] The Network was born out of UNESCO's Global Alliance for Cultural Diversity initiative which was created in 2002. Its aim is to "promote the social, economic and cultural development of cities in both the developed and the developing world."[1] The cities in network promote their local creative scene and conform to UNESCO’s goal of fostering cultural diversity.[1]


An important aspect of the "Creative Cities" concept is that the cities foster public/private partnerships particularly by encouraging the entrepreneurial and creative potential of small enterprises. Literature is just one of several categories of Creative Cities. Others include music, film, media, gastronomy, crafts and folk art, and design.[1]

[edit] Criteria for Cities of Literature

To be approved as a City of Literature, cities need to meet a number of criteria.[2] In essence, these are:

Say Saturday the 16th at 5:30 at ... Micky's? or Dublin Underground? Somewhere on the PedMall area anyway.  Let me know bloggers!

Even so, please consider heading over for a couple days of incredible bookish fun in great Iowa summertime weather! The campus is beautiful and never more so than high summer. Except game day. GO HAWKS!