Sometimes your own town can surprise you. No matter how long you've lived there, and no matter how small it is. You may think you know it forward and backward and that may be true. But...

Then there are the times when you find out something new and it turns out to be amazing.

I had that weekend.

I have to give credit where credit is due. A good friend of mine insisted that I had to go to this place to hear this 'concert'/band. He said he was sure I'd love it. He was sure it was my scene and that I"d have a great time. He was right about 2 of those three things... but I'll get to that.

The venue is one I, as a 20 year resident, have heard of since it's inception in 2009 but hadn't managed to wander out to...and now I'm wondering just HOW that was?

Because this weekend this marvelous venue, in all its unique glory, hosted an internationally known personality.... He acts, he sings... He's adorable! I had the pleasure of seeing (and later actually got to shake hands with)... John C. Reilly!! 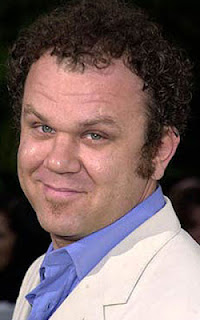 Who hosted John C. Reilly and Friends. If you heard him in Chicago you know the dude has a voice! He plays too and travels with a stellar crowd of pickers and singers! Youtube it! Seriously.

So here's the barn (from a different concert but the same layout and all) and trust me these pictures dont do it justice! 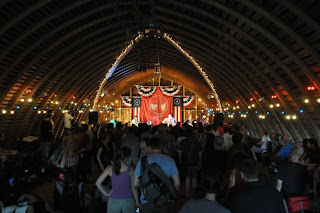 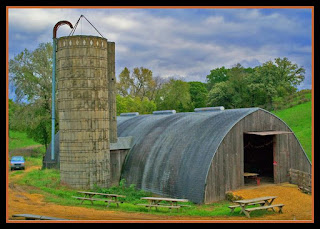 This is an experience you have to see and feel to believe. or appreciate.

First it's seriously out in the boonies.

Second because you get to see amazing people up close and personal like!! 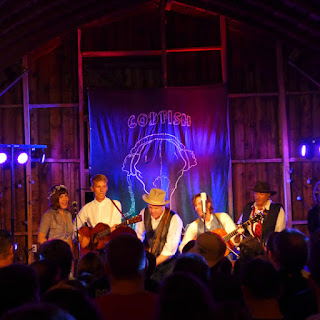 Third because it's like a transplant from not only another place, but another time! There is more in common with 60's commune than 21st century agri-business farm. And I for one am thoroughly thrilled!

I could go on and on, but it was a Friday night, and it is a 'coolers welcome' facility so bits and pieces get a little hazy.

Suffice it to say I'll be going back. With my camera ... and a notebook!! Until then, please go look at the website! If you'll be around, totally hit them up for tickets! Then let me know and we can raise a toast to a true American venture and a blog-gold good time!

And while this SHOULD have been sufficient to make me fall in love with Codfish Hollow forever, on a slightly swervy stumble back from the bathroom at the Beihl home, I passed a room that simply knocked my socks off!! Floor to ceiling bookshelves!! Books everywhere!! And being the woman after my own heart... every Stephen King book imaginable!

I'd love to go back just to compare collection notes and maintenance tips, and acquisition secrets. Seems Tiff and I just MAY have some common denominators and my friend was dead on right when he said  these were 'my people!"
Posted by Laura @ The Shabby Rabbit at 11:16 PM