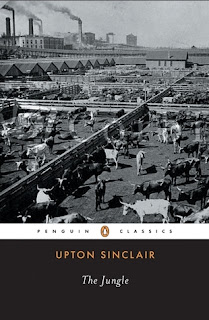 goodreads blurb:
1906 bestseller shockingly reveals intolerable labor practices and unsanitary working conditions in the Chicago stockyards as it tells the brutally grim story of a Slavic family that emigrates to America full of optimism but soon descends into numbing poverty, moral degradation, and despair. A fiercely realistic American classic that will haunt readers long after they've finished the last page.

My take:
I may write more later but suffice it to say... once upon a time an immigrant and his friends came to 'Murica for the promise of the land of milk and honey. Then some bad things happened and some bad people swindled the immigrant, then he vowed to work and work to make things right, but then some OTHER bad things happened and THEN someone died and THEN some bad things happened and THEN someone else died and THEN the immigrant felt terrible. Until the immigrant sat in a meeting and heard a miracle man call him comrade and talk about sharing. The moral of the story is.... this book took a long, long time to get to Sinclairs belief in Socialism. On the other hand... the exposure of the conditions of the packing houses were phenomenal and ground breaking. And it DID (in real life) cause legislation to be passed on the treatment of both our food source and our food workers. 3 stars totally go to this book for the social exposure, but it wasn't exactly an enjoyable read. I work in the meat/food industry so perhaps I'm more jaded. Perhaps I'm more aware that things haven't become all that much better that 'immigrants' are still ushered in and mistreated. That there are still atrocities going on with our meat. And that I could potentially get fired for saying even this much. Luckily no one reads my blog :) And at this point, I'm so opposed to what I see and the attitudes I encounter, I frankly don't give a damn.  This book was 1906, but it smacked to me of 2006 and I'm afraid just like 2016 too.

Maybe I won't write anymore later after all!! :D
Posted by Laura @ The Shabby Rabbit at 9:42 AM