Listening to a Classic - Pros and Cons

I am listening to a classic now as I travel the short distance back and forth to work and the overly often trip to Wal-Mart.

The Classic is: A Tree Grows In Brooklyn. 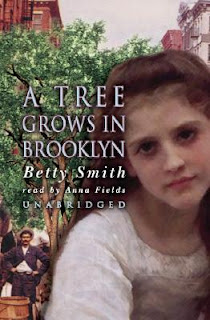 This is going to be one weird admission on my part, but I had absolutely NO prior knowledge of this book or any preconceived ideas of what it was going to be like. Except as a literary classic whose name gets tossed around the 'best books in like ever' lists, I hadn't even heard of it. By that I mean, none of my friends had read it, schools didn't read it, I had never seen it on the literature shelves in the libraries I frequented from school to now.

And this is saying something because I'm pretty old!! (Ok that is, taking into consideration the mean age of the average book blogger I'm skewing the math!)

I'm not sure how I feel about this. What else does that mean I'm missing! Anyway, so I go about finding this book listed as one of the best books of the 20th century. And as I begin to get into it, I find I'm very surprised by it and at first, I actually really and truly, do. not. like. it. atall!

Which brings me to the listening part. The reader of this particular recording has a pleasant voice and is very good at accents, especially Brooklyn accents. And I'm thinking that turned me off of these characters.

Until a poignant passage comes along, then I catch myself skipping back to hear it again, and I wonder if maybe I don't like these people and am not sold on the book because of the audio.

Which I've wondered about other books I've listened to and not been so keen on...

which leads me to wonder if maybe I just don't really like audiobooks????

I'd hate that actually because I've gotten so many more books 'read' on my lists since I've started to listen to them, but I don't think they effect me in an honest way....in the authors way.

Maybe it's just classics I should shy away from on the audio list. No matter what, it's too late to go back and give this book a try in print because the reader's voice and her inflections and accents will stick with me.

Anyone else run into this phenomenon?