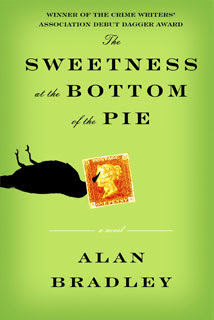 I just finished The Sweetness at the Bottom of the Pie by Alan Bradley. And I have no idea what I think of it.

For those of you who are unfamiliar, I'll give a quick synopsis this time. (which I usually dont because I'm too anxious to get to my opinion - my 'take' on a book). So I'm going to 'borrow' the synopsis from the Flavia de Luce website - she's the protagonist of this story.

Great literary crime detectives aren’t always born; they’re sometimes discovered, blindfolded and tied up in a dark closet by their nasty older sisters. Eleven-year-old Flavia de Luce’s bitter home life and vicious sibling war inspires her solitary diversions and “strange talents” tinkering with the chemistry set in the laboratory of their inherited Victorian house, plotting sleuth-like vengeance on Ophelia (17) and Daphne (13), and delving into the forbidden past of her taciturn, widowed father, Colonel de Luce. It comes as no surprise, then, that the material for her next scientific investigation will be the mysterious corpse that she uncovers in the cucumber patch. Fearless and darkly imaginative, Flavia hurries to solve the murder and acquit her father of suspicion. Following the lead of its clever protagonist, Sweetness is entirely inventive, fast-paced, and quick-witted, with tongue-in-cheek humour that derides the macabre seriousness of subject.
Alan Bradley plants the story deep into the setting of 1950s England, with a portrait of an eccentric home life that is all too wickedly familiar. The story’s twists are supported by the time and place as well as the unusual interests of the characters which range from stamp-collecting to making poisons all of which are highly researched and ingeniously incorporated.

So I kind of do know what I think of it... at the moment. And my first impression is that this wasn't my favorite book, but then when I break it down it SHOULD be one of my favorites. This book had everything a good book, nay... a favorite book should have!

Let's start with the writing. Never once was I jolted out of my, for lack of a better phrase, visit to this story, by hack writing, weak sentences or trite descriptions! Characters were multi-faceted and rather unpredictable.

The setting was wonderful! England in the 50's. What a treat!

The plot was fun, flowed well, didn't veer into the totally unforeseen and tied up as a good mystery should almost to the point where I expected to hear "and I would have gotten away with to if it weren't for that meddling kid!"

But right now, there were annoyances... Flavia being my first and foremost. I really had a hard time buying this chick - little chick - she's 11. I have girls. I have precocious girls. I have intelligent precocious girls. If Flavia were American in a today's setting... she'd be a home schooled kid (no offense to home schooling parents) and by that I mean in the arrogant, socially awkward way some of them have... you know... commonly referred to as the 'home-schooled vibe'.

My other annoyance would be a spoiler so I will not include it specifically, only to say... I have said before I don't usually like "neat package" stories and this one was too much just that.

Still, I get the feeling the memory of this book will grow on me. I'll look back and remember this book and know that it was better than I gave it credit for. And I'll wonder what I was thinking that I didn't score it higher. And I may even come back and up it's rating.

In the meantime... I think I'll go make a Cheesecake to celebrate this book. It's the closest thing I have to a custard pie. 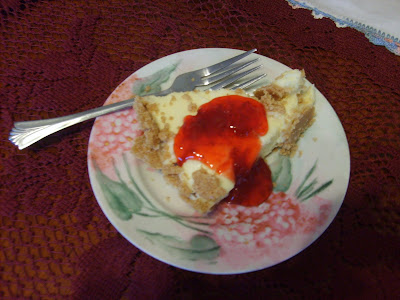 
Now I have a problem... the last book on my list isn't available at our local library. And I have so many books here to read that I can't choose!!! Cormick McCarthy - All the Pretty Horses, Angelas's Ashes, Memoirs of a Geisha, Wally Lamb, and about 20 others just here in the living room! Help! What to do?
Posted by Laura @ The Shabby Rabbit at 6:47 PM